Do you dream of off road adventures, free of paved roads and never ending horizons? Do you need a vehicle that is rugged enough to handle unknown terrain and conquer unforeseen obstacles? Even though it’s common knowledge that today’s 4x4s don’t pack quite the same punch as their predecessors did 10+ years ago, today’s models will still allow you to enjoy the road less traveled-and in style, no less. The five off road vehicles we’ve rounded up can be found on countless lists all over the internet. We decided to stick to just five of the best options available (and yes, that includes the infamous Jeep Wrangler) because at the end of the day it’s about quality, not quantity.

A smaller substitute to the Ford F-150 Raptor (another awesome off-road vehicle), the Colorado ZR2 is just one of the many special editions created for Chevy Colorado. Designed for the Raptor and Tacoma TRD crowd, the ZR2 features a wider wheelbase, upgraded suspension, electronic locking rear and front differentials, and driver controlled traction control. This capable midsize off-road truck has an available Duramax® 2.8L Turbo-Diesel engine,standard 3.6L V6 engine with best-in-class horsepower, as well as hard-core gear and segment-exclusive components.

As the most capable member of the Ram 1500 family, the Ram Rebel means series business. The Rebel has a distinctive front grille, that incorporates a dynamic hourglass body design, with steel bumpers and black inserts for an overall aggressive concept. This beast of an off road vehicle, offers a full frame with independent front suspension and a solid rear axle – to handle any off road terrain. Air suspension in all four corners supplies better highway gas mileage and unsurpassed off road ground clearance.The Ram Rebel is offered in either a crew or quad cab design. Both options possess standard V6 power (with optional V8 engine), skid plates, and 33 inch Goodyear tires.

Since the original model’s first debut in England in 1970, the Range Rover has continued to seamlessly combine luxury and off-road capability throughout the years. Choosing a Range Rover as your off-road vehicle is a bit of an investment upfront, but definitely worth the extra dough in the end. Starting at $84,000 this sleek off-road king offers off-road enthusiasts pure off-road power and better fuel economy then past models. The latest models are constructed from weight-saving aluminum and come with smaller engines, thus making them more efficient on mileage. Other off-road features you’ll enjoy include,  2.93:1 low-range gearing, optional locking rear differential (great for climbing), adjustable and long travel air suspension, and a computer-controlled Terrain Response four-wheel drive system. Additionally, the Land Rover Range Rover can be raised on it’s springs for over a foot of ground clearance.

If there’s one thing Toyota excels at, it’s always offering the public an off-road vehicle that has outstanding off-road capabilities, the Toyota TRD Pro is no exception to this rule. Where the TRD lacks in efficiency as daily driver it makes up for in primo off-road features, such as the Fox Racing shocks you’ll find in all 2019 models.

The TRD model comes equipped with Toyota’s Crawl control (off road cruise control)which  make this a mountain climbing juggernaut. The taller Eibach coil suspension adds an extra inch of wheel travel, which can make all the difference. Being able to tackle desert trails and climb mountains, makes the reasonable starting price of $43, 000 totally worth it.

As one of the most iconic off-road vehicles in America, no list would be complete without the Jeep Wrangler. The Wrangler is one of the most affordable, adept, and most fun off-road 4x4s, and is a great option for many motorists who may wish to make modifications in the future. (stock Jeeps can still handle off-road trails).

Most off-road enthusiasts opt for the Jeep Wrangler Rubicon, which features “rugged 33-inch tires, an 84.1:1 crawl ratio and easily accessible switches for engaging 4×4 capabilities, the Rubicon is tailor-made for all kinds of boundary-breaking experiences”. 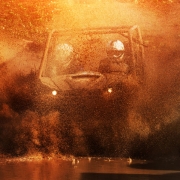 Want to join the discussion?
Feel free to contribute!

Illuminate The Trail With Premium Off Road Lighting